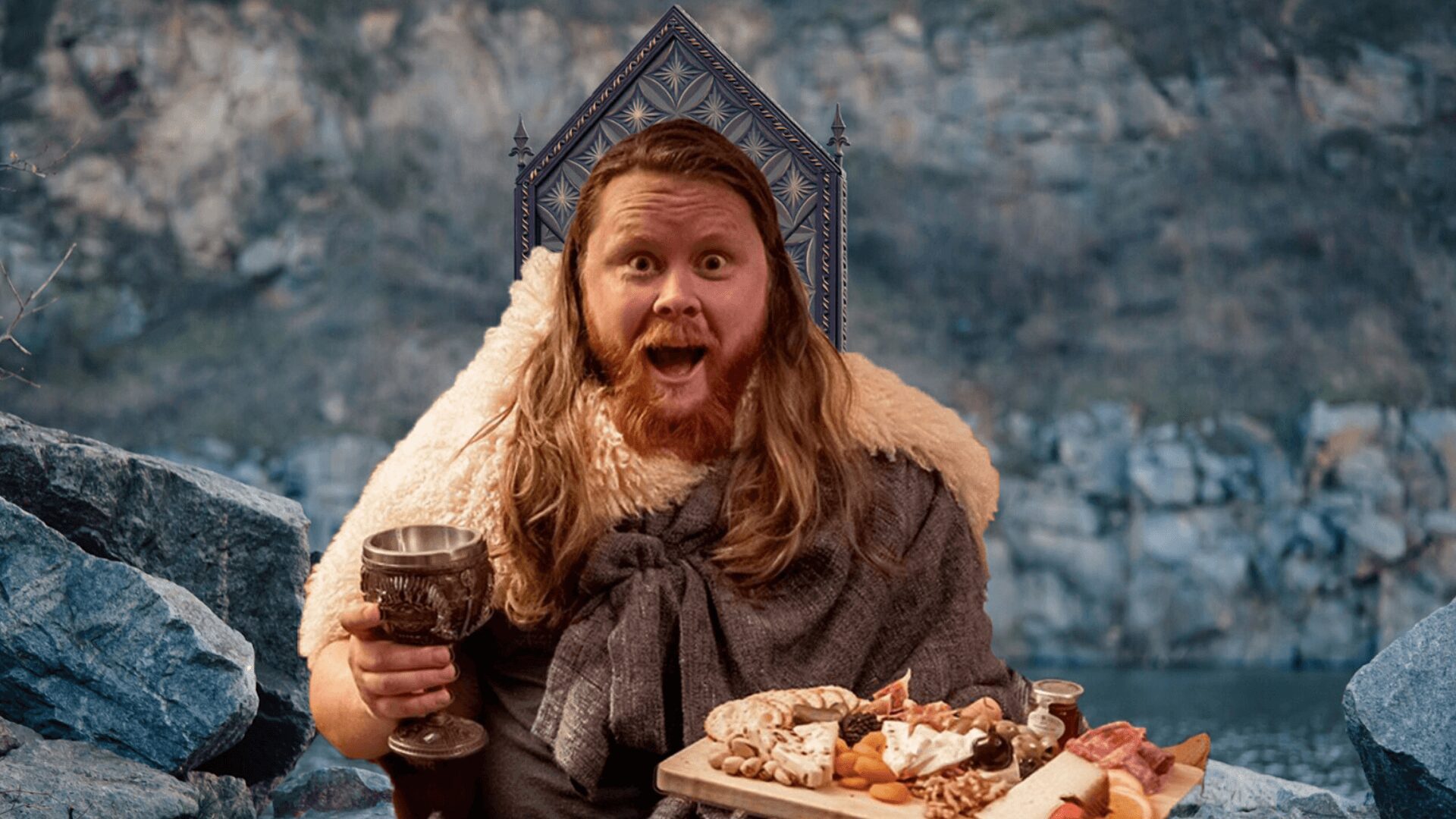 All about the parentsDaddy Cool

Game of Thrones – The Iron Anniversary

To celebrate 10 years since the first episode of Game of Thrones aired, we couldn’t think of anyone better to reflect on its legacy than our bearded, long-haired nerd-father Jamie. Here he shares how he marked the Game of Thrones Iron Anniversary. Including a special streaming of his favourite episode with a Q&A with one of the show’s stars.

It’s no secret that I’m a bit a nerd, especially when it comes to films and TV of truly epic proportions. When our little one was a newborn, she would frequently keep me up all night. Demanding hugs and feeds while mum got some much needed rest. Now she’s a toddler and she sleeps a little better. But the late nights are the only time I get to myself. I still do the same thing I did in those early parenting nights – binge on boxsets!

The go-to 21st century entertainment is streaming our favourite TV shows and films directly to our homes. Over the past decade there is one show that has built up a cult following. It exploded out of nerd culture and thoroughly filled the mainstream with its fantastical dominance. Game of Thrones – the TV adaptation of George R. R. Martin’s “A Song of Ice and Fire” book series started its broadcast life a whole 10 years ago. Meaning the show about the Iron Throne celebrates its Iron Anniversary. This is something I needed to celebrate!

Dressed for The Occasion!

When Dadvengers were offered the chance to take part in the official Game of Thrones Iron Anniversary, I leapt at the chance to join in. In normal times, this would’ve undoubtedly been a red carpet event. In a way this event was perfectly adapted to how we all enjoyed the show over the last decade. We were hooked up with a special live stream. I received a celebratory hamper to make for the most epic night in for a Thrones fan like me. Naturally I went one further…

Yep! I put on my cloak and sheepskin to keep me warm and I tucked into the amazing goodies we were sent. The hamper included a specially brewed House Mikkeller of Denmark Iron Anniversary IPA to wash it down. Being an ale drinker (yes I’m a bit of a hipster) I have to say it was exceptionally pleasant. One of the best brews I’ve enjoyed in a long time.

So, there I am, wrapped up on the sofa and the 4K TV set up ready. The familiar sound of that epic theme tune started and my little nerd heart skipped a beat. I was full of excitement for what was about to come. The episode we were to enjoy was the iconic season 6 episode “Battle of the Bastards”. An episode that earned the show a whopping 6 Emmy Awards. For those who haven’t seen the show (why not?!) there will be spoilers ahead!

I had almost forgotten that the episode opens in Meereen, as Daenerys Targaryen faces the Masters of Slaver’s Bay. She quickly puts a stop to the siege. In true GoT fashion – riding her largest dragon Drogon out over the water to effortlessly take out the siege ships. This sets the tone for Daenerys going forward. Her dragons prove pivotal in so many moments in the show’s final 2 seasons. Then there was the main part of the show – the titular Battle of the Bastards.

This episode marked the culmination of years of hardship for the Stark family. As the reborn Jon Snow unites forces of Wildlings and a few Northmen. He heads to battle take back the family home of Winterfell from Ramsay Bolton. One of the show’s most charismatically despicable villains. After a face-to-face parley between Jon Snow and Ramsay Bolton (the ‘bastards’ of House Stark & Bolton) fails to reach any settlement, the stage is set for one of TV’s most cinematic battles.

In true Ramsay fashion, he taunts Jon Snow by releasing the captive Rickon Stark towards him across the empty battlefield. Before taking him down with an arrow mere seconds before Jon could reach him. This typically cold-blooded tactic was enough for Jon to react in the heat of the moment, and his forces charged forwards. The Northern forces fell into Ramsay’s trap and, using a classic pincer movement, were all but defeated. As the surrounding forces penned them in closer, the bodies piled up. Jon Snow and his men were soon being crushed, quite literally. This moment gave us one of the most memorable shots of the entire series. We see our hero Jon Snow fighting to keep his head above the melee to breathe.

The Winner Of The Battle…

By this point, fans of the show had become accustomed to our favourite characters being killed off. We resigned ourselves to this being the end of Jon, as well as our favourite Wildlings too. But in a twist we wouldn’t have expected from GoT we hear a horn sound as Sansa Stark arrives, accompanied by the Knights of the Vale. They swiftly sweep down into the battlefield and take out the remaining Bolton army.

Arguably, Ramsay had underestimated his wife’s abilities! Particularly in how well she could predict his tactics, and this led to his defeat. After retreating to Winterfell, the pursuant Northern army breaks in. With the help of Wun Wun the giant, and we see the bastards face off man to man. Jon beats Ramsay – very literally – before stopping short of finishing him off, as he sees Sansa. Ramsay’s fate was much more poetic, gory yet ultimately satisfying. We see him perish the way in which he sadistically tortured so many others. Tied to a chair in the kennels, and left to his ravenous pack of hunting dogs!

With so much packed into a single episode, it is no wonder that this show won the hearts of the fans, and many industry awards. Time to sit back with a beer me thinks.

To help us unpack the show’s legacy, and as part of celebrating the Game of Thrones Iron Anniversary, we were treated to a special Q&A. Actor Iwan Rheon who played Ramsay Bolton, hosted by the massive Thrones fan Jamie East hosted the Q&A.

Asked about what was most memorable about the filming of the episode. Iwan Rheon simply replied “The scale of it all.”
When we look at that episode, it had an estimated budget of $30 million. It took 25 days to film the battle scene alone, included 500 extras, 600 crew members and 70 horses. The episode’s director, Miguel Sapochnik, had originally planned a 48 day schedule. This had to be whittled down to fit the budget and timeframe. The logistics involved were astronomical, including the building of stables on the site to accommodate the horses. Adding snow to trees to maintain the scene, and an entire warehouse down the road that housed one single item. The enormous pile of fallen bodies that the Wildings clambered up when encircled.

Rheon shared how it was his favourite episode to film. In particular, he said that the parley scene with Kit Harrington, was “a dream as an actor”. With two pivotal characters in the show finally facing off on horseback. Jamie East mentioned the impact of the episode’s cinematography on other shows and films. That is a view that I share, especially with other epic battle films such as Avengers Endgame. This episode, and the show as a whole, has sent ripples throughout the film and TV industry. With viewer’s expectations now at an all-time high. From the details of props and costuming, to the scale of scenes, as well as the calibre of acting. We are all demanding more from the productions nowadays.

Talking of his character’s death, Iwan Rheon felt it was “a very fitting death” for a character that fans had a “love-hate relationship” with. As a fan, I hated Ramsay Bolton and what he did. But the show needs villains like that in order to create the heroes we love. In his final few scenes, where we see Ramsay at the hands of Jon and Sansa, the character of Ramsay never dwindles.

One of Jamie’s favourite bits was “Jon Snow his pounding his head in, and somehow Ramsay still has a smile on his face.”
Iwan Rheon added that Ramsay was “still taunting Sansa and Jon, even at the end. It summed up his sadistic nature. His poetic death at the end is punctuated by Sansa walking away from him as he screams in pain. A a wry smile appears on her face. The meek Sansa we knew is now fortified by this win. We see her Stark strength come to the fore.

The Real Winner of the Game of Thrones Iron Anniversary Episode

The battle was won by her, and Ramsay was defeated by her – and we loved that. For me, Game of Thrones is one of the most pivotal and influential television productions in history. With its impact being felt in all areas of writing, cinematography and production in the years following its completion.

As us fans eagerly await the arrival of the spin-of prequel show House of the Dragon. With the amazing Miguel Sapochnik as one of the showrunners. I am keeping myself occupied by rewatching the entire 8 seasons of Game of Thrones. This time on 4K Ultra-HD Blu Ray!

Are you a Game of Thrones fan? Was this one of your favourite, most iconic episodes? Let us know in the comments. Or come and tell us what you thought at one of our Dad Chats.